What Gives You Goosebumps?

When the Goosebumps books first came out in 1992, I was at just the right age to start reading horror books on my own. I hadn’t yet hit double digits at this point, but I had a library card and an unquenchable thirst for good stories, and it wasn’t long before I was drawn in by the colorfully grotesque covers of one of R.L. Stine’s most famous series. It’s now been almost 30 years since those books began coming out, and the one thing I can recall most clearly is that so many of the stories ended on something of a cliffhanger, which was something of a trope of ‘90s horror in general. Many books, stories, and movies would end with some twist that would let the audience know that despite the heroes supposedly winning the day, there was more horror to come.

Even the Scream movie played

around with this concept in 1996, when Randy says, “Careful. This is the moment when the supposedly dead killer comes back to life, for one last scare.”

In Goosebumps #6: Let’s Get Invisible! Max, his brother, and their friends discover an old mirror that causes them to disappear when they stand in front of it. The ultimate crux of the story is that there are evil mirror reflections that are attempting to replace the characters, and by the end of the story Max’s brother breaks the mirror and the real children are restored; but wait, in the final sentences of the book Max discovers his brother, nicknamed Lefty, is inexplicably throwing a softball to him with his right hand. This is the kind of thrill that I enjoyed as a kid – not knowing what would happen next in the story. 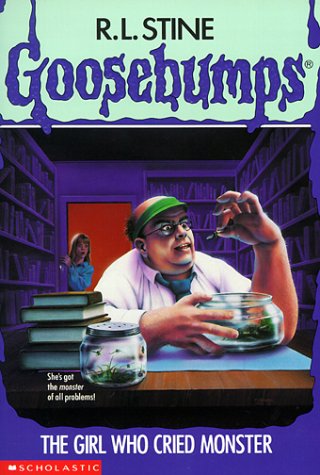 Other books in the Goosebumps collections dealt with a different kind of horror, the type that gives you the twist by revealing at the end of the story that the narrator has been unreliable the entire time. My favorite example of this is #8: The Girl Who Cried Monster. In this book, the main character Lucy has a history of telling tall tales about monsters designed to scare her little brother Randy, to the point that when she actually sees one…no one believes her. Ultimately, it is revealed that Lucy’s family is entirely comprised of monsters and that she and Randy are too young to eat other monsters just yet, which means that their parents do so to avoid any attention being drawn to them by the presence of others.

Stories like these are prevalent among all age groups, yet it surprises me to this day that they are so readily available for children. It makes you wonder just how much of our adult tastes are formed by the stories we read in our youth. Leave a comment below and let me know if your love of horror now is because you read Goosebumps or the Fear Street Saga, or even the Christopher Pike books (who can forget Remember Me and Chain Letter?). Or is there another root cause of your current book genre of choice?

Be sure and pick up your copy of Night Shadows for only .99 cents! A jaded cop and an FBI agent pair up to stop a mad man with a devious plan in this supernatural thriller guaranteed to become a favorite. In addition to Night Shadows, check out the other three books shown here, also on sale for .99 on Amazon!

Don’t forget that for the month of July, you can get 20% off all purchases through our site with the code HSH2021.